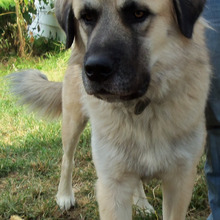 The Sarplaninac, which is pronounced shar-pla-nee-natz, originates from southern Kosovo and the North-west part of Macedonia. Originally knows as the Illyrian Shepherd Dog, the breed received their current name in 1954 after the collapse of Yugoslavia and the Soviet Union. The breed exists in sustainable quantities in Albania and Macedonia. Although distress in Bosnia has brought the breeds numbers down, there have been exports to the U.S. And Canada since 1975. The breed was exported to control coyote population. Due to this, the Sarplaninac has gained prestige as a hard-working flock guard.

The Sarplaninac's coat is typically 4 inches in length. The hair is thick and well distributed. The coat colors are gray, white, black or tan and can be solid as well as blended. The body appears large due to the bushy appearance of the coat, however, the breed is medium in size. The nose is a bit large and the eyes are dark with an almond-shape.

The Sarplaninac will protect the entirety of it's territory as well as all of those residing within it. The breed will tolerate family members, including children, so long as they are raised with them. However, they will be cool and distant with strangers. This breed is not for the beginner. The breed is ideal for working farms, however, if you plan to keep it as a pet, you must be a firm and consistent pack leader.

The Sarplaninac has an all-weather coat that will require the occasional brushing. They are not suited for apartment living and will be perfectly happy to spend their days outside. They will be made to feel at home best on a farm with a herd to guard.

The Sarplaninac is an intelligent and stubborn breed. They require a firm and consistent master for successful training.

A very physical breed, the Sarplaninac requires a large amount of daily activity. In their ideal environment on a farm, their activity needs are met easily. However, if they are not in a working environment, the breed will require daily walks or jogs.