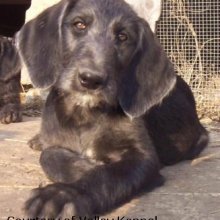 Weimardoodles vary widely in size, depending on whether they are bred with a Standard, Miniature, or Toy Poodle. Miniature Weimardoodles, the most common, have a shoulder height of 17-21 in (43-53 cm) and weigh 30-50 lbs (14-23 kg). Some have the stocky build of a Weimaraner (along with its characteristic grey or amber eyes) and others are thin like the Poodle. Weimardoodles should have a head and limbs proportionate to their body size to prevent back problems; natural breeding rather than artificial methods will produce the best result.

The Weimardoodle is affectionate with children, dogs and other pets. It is a little reserved with strangers. Weimardoodles may grow jealous when a new child or pet arrives in the family; be sure to give them extra attention at these times. Larger Weimardoodles with high energy levels should be supervised around young children to prevent an accident. Socialization when young is recommended for the Weimardoodle.

The Weimardoodle requires occasional brushing and grooming several times a year, depending on coat type. Bathe only as necessary. The Weimardoodle has a lifespan of 10-13 years. Like other hybrids, Weimardoodles tend to have fewer health problems than purebreds (known as hybrid vigor). Possible health issues are hip and elbow dysplasia (malformed joints which can cause lameness or arthritis), hypothyroidism, and eye problems such as entropion, distichia, and PRA.

The Weimardoodle inherits the Poodles intelligence and the Weimaraners devotion, making it easily and quickly trained. A gentle and positive reinforcement-based approach is recommended.

The Weimaraner and Standard Poodle require a substantial amount of daily exercise, and the Miniature Poodle considerably less, so depending on the Weimardoodles genetic makeup, it may be satisfied by a daily walk or may demand lengthier outings in the countryside.