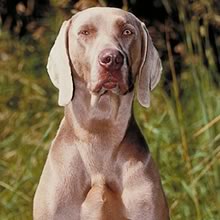 The Weimaraner (also known as the Weimaraner Vorstehund, Weim, Silver Ghost, or Gray Ghost) originated in Germany in the 1800s. It was bred from Continental pointing breeds, Bloodhounds, and mastiffs in an intentional effort to produce a noble looking, all-purpose gundog which could hunt prey of all sizes. The origins of the Weimaraners distinctive grey color are unknown, but it has been present for centuries. The Weimaraner is named for the Grand Duke of Weimer, whose court sponsored its breeding. Ownership of the Weimaraner was carefully restricted for decades; only members of the upper class German Weimaraner Club were allowed to own the breed. For this reason, most dogs were kept indoors and pampered, leading to a strong attachment to the family which continues to this day. A pair of Weimaraners was finally released to America in 1929, and the Weimaraner quickly became a popular hunter and show dog, achieving American Kennel Club recognition in 1943. Famous Weimaraners include Dwight D. Eisenhowers dog Heidi, and Man Ray and Fay Ray, photographer William Wegmans pets and photography subjects.

The Weimaraner has a short, hard coat which is smooth to the touch. There is a long, silky haired variety with an undocked tail which is recognized by some standards, but not in North America. The Weimaraner is a distinctive gray color which can range from silver to mouse-colored (beige or tan toned). The skin is flesh-toned rather than white or black.

The short-haired Weimaraner has few grooming needs. Periodically use a rubber brush to remove dead hairs. The long-haired variety needs to be brushed and combed regularly. Its ears must be checked for cleanliness to prevent infection.

Behavioral training is strongly recommended for the Weimaraner; some suffer from separation anxiety or aggressive behavior (as a natural hunter, all Weimaraners will maintain some degree of aggression). The Weimaraner is eager to please its handler and learns quickly. A confident approach is required as this breed sometimes tries to dominate. Weimaraners excel in a variety of dog sports such as agility competitions.

The Weimaraner needs daily strenuous exercise such as a long jog or play in a yard; it has a seemingly endless supply of stamina. This is definitely not a breed for those who are unprepared to exercise it regularly. The Weimaraner is unsuited for apartment life, preferring life in the country where it can run freely.