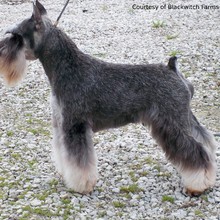 Schnauzers (meaning small beard in German) are named after an actual dog, Schnauzer who lived in Germany in the 1870s, but the breed itself existed as far back as the Middle Ages. This is evidenced by various sculptures and Rembrandt paintings. Early Schnauzers were likely derived by crossing gray spitzes with black poodles. This resulted in an adept rat hunter and guardian that became incredibly popular by the early 1900s, due in part to its distinct appearance. Standard Schnauzers (or Mittelschnauzers) became popular in World War I by serving as messengers and police dogs, and increased in popularity as a pet after World War II. The Miniature Schnauzer (or Zwergschnauzer) was bred in the late 1880s as a ratter by crossing the Standard Schnauzer with the Affenpinscher and probably the Poodle. The Miniature Schnauzer was recognized by the American Kennel Club in 1933. It is the only Schnauzer classified as a Terrier, and the only Terrier that does not descend from the British Isles. It was not imported to America until the mid-twentieth century, but quickly surpassed the Giant Schnauzer and Standard Schnauzer in popularity, rising to become the countrys third most popular dog breed.

Though the Miniature Schnauzer learns fast, it has a slight stubborn streak. Training must be fair and consistent and should not be overly repetitious. Miniature Schnauzers are responsive to the sound of their handler's voice. They are versatile, and can learn a variety of activities such as hunting, retrieving, and herding.

The Miniature Schnauzer has energy far exceeding its size and enjoys going for runs or playing games in the yard. It is well suited for apartment life.