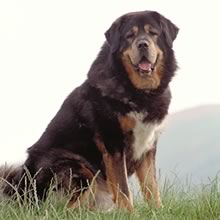 The Tibetan Mastiff, also known as the Do-Khyi or Tsang-khyi, is an ancient breed which descended from large Chinese dogs in the second millennium B.C. It may have arrived in Asia with the armies of Attila the Hun or Genghis Khan. The Tibetan Mastiff is an influential breed, thought to be an ancestor of the Saint Bernard, Newfoundland, Pug, and others. Its original function was as a guardian for sheep flocks, monasteries, and entire villages. Marco Polo met some Tibetan Mastiffs on his trips throughout Asia, describing them as tall as a donkey with a voice as powerful as that of a lion. The Tibetan Mastiff was unknown outside of Tibet until 1847, when Queen Victoria received one as a gift from the Viceroy of India. Tibetan Mastiffs became endangered in their native country in 1959 when China invaded Tibet. Two Tibetan Mastiffs were delivered to President Eisenhower by the Dalai Lama as a preservation effort, but they did not successfully produce any breeding lines. Larger numbers of Tibetan Mastiffs were finally imported to the U.S. and Europe from India and Nepal in the 1970s. The Tibetan Mastiff was accepted under the American Kennel Clubs Miscellaneous category in 2005. It is still somewhat rare, but breeders are successfully increasing the Tibetan Mastiffs number through selective crossbreeding of international stock.

The Tibetan Mastiff normally has a shoulder height of 61-66 cm (24-26 in) and weighs 45-72 kg (100-160 lbs), though a few stand up to 80 cm (31 in) and weigh as much as 110 kg (242 lbs). The Tibetan Mastiff has a large, wide head with pronounced stop (depression where the muzzle meets the forehead), deep set eyes, and high set V-shaped ears. Tibetan Mastiffs have a flat back, stomach tucked up behind the chest, long tail curled over the back, and large, round feet.

The Tibetan Mastiff is reserved around strangers. It loves children it knows, but unknown children may be considered a threat against children of the family. Provided proper socialization has taken place, the Tibetan Mastiff gets along well with other dogs and household pets.

The Tibetan Mastiff requires grooming with a brush, especially on the hindquarters and tail. Brushing should occur weekly, or daily when shedding. The Tibetan Mastiff has a fairly long lifespan for a large breed at 10-14 years. It is a healthy breed, especially given the limited breeding pool, but susceptible to common canine health problems such as hip and elbow dysplasia (malformed joints which can cause lameness or arthritis), ear infections, skin allergies, and eye problems such as PRA and entropion/ectropion (curled eyelid which can scratch the cornea).

The Tibetan Mastiff must be trained in an atmosphere of mutual respect, as it will ignore a handler who uses strong words and shows a willingness to strike. Obedience classes when young are highly recommended.