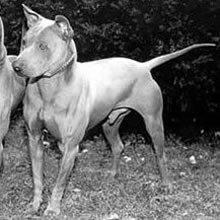 The origins of the Thai Ridgeback (also known as the TRD or Mah Thai Lang Ahn) are largely unknown, but it is widely believed that the breed is related to the Rhodesian Ridgeback and Phu Quoc Dog, the only other breeds with a distinctive back ridge, formed from hairs running in the opposition direction to the rest of the coat. Some believe the Thai Ridgeback is a descendant to the Rhodesian Ridgeback based on the theory that all African breeds descend from Asian breeds. Another possibility is that the ridge originated in Africa from the African Hottentott Hunting dog. DNA studies are being conducted to investigate the relationship of the three breeds. In any case, the Thai Ridgeback was common in Thailand by the mid-1600s, where it was used as a watchdog and escort. The Thai Ridgeback has changed little since the 1600s due to the isolated nature of Thailand. Efforts to standardize and preserve the breed began in Thailand in the 1970s. The number of Thai Ridgebacks in Thailand has increased substantially, and the breed is growing, but still very rare, in Europe and America. PLEASE NOTE: This breed has been accepted for recording in the AKC Foundation Stock Service (FSS). This is simply an avenue to maintain reputable records regarding the breeds development. This breed is not eligible for AKC (American Kennel Club) registration.

The Thai Ridgeback has a height of 20 to 24 in at the withers and weighs 51-75 lbs (23-34 kg). It has a wedge-shaped head with distinctive wrinkled forehead, dark, almond-shaped eyes, and low-set prick ears pointed slightly outwards. Some Thai Ridgebacks have a solid black or black spotted tongue. Thai Ridgebacks are muscular with a flat back and sickle-curved tail carried high.

The Thai Ridgeback has a short, hard, dense, smooth coat which can be blue, black, beige, red, fawn, brindle, or white, the last two of which are not acceptable in the show ring. Its coat grows longer in winter. The Thai Ridgebacks defining feature is the ridge down its back from the shoulder to the hips, composed of hair running in a different direction to the rest of the coat. The ridge pattern is classified into eight categoriesthey are (from thinnest to widest) needle, arrow, feather, violin, lute, bowling pin, leaf, and saddleback.

The Thai Ridgeback is naturally protective of its home and family, which can make it aggressive with other dogs, but this shouldnt be a problem if the dog is properly socialized when young. Thai Ridgebacks have a strong hunting instinct which may become prevalent around smaller animals.

The Thai Ridgeback requires occasional grooming with a brush and comb, especially when shedding. The Thai Ridgeback is a very healthy breed for a dog with such limited stock. Potential health problems are dermoid sinus (a skin condition resulting from the ridge), and hip dysplasia (malformed hip joint which can cause lameness or arthritis).

The intelligence and obedience of the Thai Ridgeback makes training a straightforward task, but it requires a dominant owner due to its independent nature and wild streak. Obedience training when young is highly recommended.