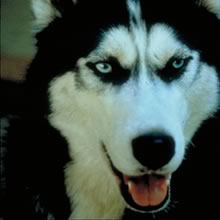 The Siberian Husky (also known as the Chukcha, Keshia, or Arctic Husky) originated as a sled dog for the Chukchi tribe of Eastern Siberia (in northern Russia) several thousand years ago. It was imported to Alaska in the early 20th century during the Alaskan gold rush. The Siberian Husky attracted attention when it completely dominated native breeds in the 400 mile All-Alaska Sweepstakes race from Nome to Candle in 1910, the second year in which it competed. It gained further prominence in 1925 when a gold miner named Leonhard Seppala used a now-famous team of Siberian Huskies to make an urgent delivery of diphtheria serum to Nome, saving thousands of lives. This delivery became known as the Great Race of Mercy and attracted much attention to the Siberian Husky. A statue honoring Seppalas team stands today in Central Park. In 1930, Russia allowed the last group of Siberian Huskies to be exported from Siberia; the breed was recognized by the American Kennel Club that same year. Most Siberian Huskies today descend from the 1930 exports and Leonhard Seppalas team. Today the Siberian Husky is one of the most popular northern breeds, serving as a pet, sled racing dog, and show dog. Siberian Huskies appear prominently in Disney films Snow Dogs, Eight Below, and Iron Will, all based to some degree on true stories of heroic Siberian Huskies. Siberian Huskies are the mascots of Northeastern University and Michigan Technological University. A female Siberian Husky mix named Laika became the first animal to enter orbit when she was launched into space on Sputnik 2.

The Siberian Husky has a dense, smooth undercoat and coarse outer coat of short, straight hairs. Every color and combination is acceptable; common colors are pure white or white with black, grey, or copper-red, all with possible blond markings. There are a variety of striking facial markings. Siberian Huskies shed twice a year.

The Siberian Husky gets along well with other Huskies, but needs to be trained carefully to interact with other household pets. It tends not to get along with cats or other small animals. Siberian Huskies deal well with children. It is wise to have more than one Siberian Husky because they do not enjoy being left alone.

Siberian Huskies require weekly grooming with a brush and comb, particularly on the rear legs, more often when shedding. Bathe only when necessary. The Siberian Husky has a lifespan of 10-14 years. It is generally healthy, but prone to eye problems such as glaucoma and cataracts, and cancer when older. The Siberian Husky has a high propensity for obesity if under exercised, and requires less food than one might expect for its large size; consult your veterinarian for dietary information. Fish oil, which can be found in sardines or flaxseed oil, is a recommended part of the Siberian Huskys diet. The Siberian Husky is not well suited to warm climates; it needs a cool place to sleep in the summer.

The Siberian Husky will only obey commands that make sense to it. It is very independent-minded, so handlers need to have considerable patience and a good understanding of the Siberian Huskys nature.

The Siberian Husky was bred to pull a heavy sled for countless miles; it demands to be involved in physical activities. If you can't have it pull a sled, let it run alongside you as you jog or ride a bicycle, ideally for at least an hour every day. Siberian Huskies that do not get enough exercise become destructive and loud. They have a low heat tolerance, so do not over exercise them in warm weather. The Siberian Husky is not suited to apartment life.