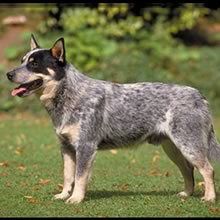 The Australian Cattle Dog (also known as the Queensland Heeler, Blue Heeler, Red Heeler, or Halls Heeler) comes from Irelandno, just kidding, Australia. When the wide open plains of Australia were opened for grazing in the early 19th century, the cattle were so active and unruly that the established lines of European herders werent up to the task. In 1840, a man named Thomas Hall crossed some blue merle Smooth Highland Collies with dingoes to create a breed known as the Halls Heelers. These were crossed with the Bull Terrier in the 1870s, making the breed more aggressive, and later with the Dalmatian for increased carriage capabilitythe ability to run alongside horses. The Australian Cattle Dogs distinct appearance and highly capable herding skills gained it notoriety across Australia. It was later imported to America and recognized by the American Kennel Club in 1980. An Australian Cattle Dog named Bluey lived from 1910 to 1939, giving it the Guinness World Record for longest canine life span.

The Australian Cattle Dogs outer coat is weather resistant, short, and somewhat rough. The inner layer is short and thick. There are a variety of coat colors: red speckled (with possible dark markings on the head), or blue/blue mottled with possible markings of any color but black. Australian Cattle Dogs are born with a white coat which darkens increasingly over time. They shed once or twice a year.

The Australian Cattle Dog is highly intelligent, making the training process simple. It is willing and able to learn a wide variety of tricks, and sports such as catch or Frisbee. Australian Cattle Dogs must be kept occupied with tasks and provided companionship or they will become destructive and mischievous.