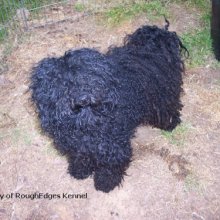 The Puli (pronounced Pool-ee also known as the Hungarian Puli or Hungarian Water Dog) descends from sheepdogs of the ancient Magyar tribe of the Ural Mountains. The name likely derives from the German word for Poodle. When the Magyar migrated to Hungary, their sheepdogs bred with indigenous species, possibly including the Tibetan spaniel. The resulting breed was an adept sheepherder, known to herd sheep by jumping on them; black was preferred to quickly distinguish the dog from surrounding sheep. The Puli was bred with western European breeds after the invasion of Hungary in the 1500s, leading to changes in its appearance which led to the near extinction of the original breed. In the early 1900s, a breeder named Emil Raitsits led a successful effort to restore the breed (though no one is quite sure what the ancient breed looked like). The Puli was first standardized in 1925 and was recognized by the American Kennel Club in 1934. Today, the Puli is a popular herder but not as popular as a show dog or pet.

The Pulis long, naturally corded coat, which reaches to the ground, is its defining feature. It is caused by the Pulis soft undercoat meshing with its rough outer coat. The coat begins cording at about six months of age. The Pulis curls are similar to dreadlocks, making it almost waterproof. The Puli can be black, cream, gray, or white. Some cream colored Pulik (Pulik is the plural noun) have a black mask. Pulik do not shed.

The Puli is friendly with children, dogs and other pets if socialized from a young age. Young children must be taught to respect the Puli and should be supervised around it; if harassed, the Puli may bite.

The Pulis coat can be brushed out or left naturally corded. Brushed coats must be brushed every day or two; corded coats need to be frequently separated by hand to remove dirt. The corded Puli should be bathed regularly to prevent fleas or ticks from collecting in the large coat. When wet, the Puli takes hours or even days to dry off. The Puli can be clipped, but this removes a lot of its unique appeal. The Pulis eyes and ears should be cleaned regularly. The Puli lives 12 years or longer. It is a healthy breed with no known major health conditions, though it may be susceptible to conditions which commonly afflict large breeds, such as eye problems and hip dysplasia (malformed hip joint which can cause lameness or arthritis).

The Puli is an intelligent breed which trains well, but it has a stubborn streak so a firm, consistent approach is required.

The Puli is an active, energetic breed which requires daily exercise. Its favorite activity is herding, but it also enjoys obedience and agility training, or just a walk around the neighborhood. Apartment life is suitable for the Puli.