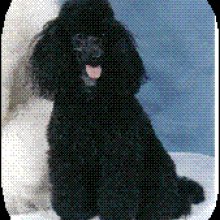 France has been officially recognized as the Poodles country of origin, but the Poodles earlier ancestors came from central Asia. The German variety has probably influenced the modern breed most (Poodle is German for splash or puddle). In 18th and 19th century Europe, the Poodle served a wide variety of purposes, including duck hunting, guiding, and later circus performing, from whence the modern grooming style likely arose. The Poodle became a popular pet for the French aristocracy, and in time was officially adopted as the national dog. Poodles were imported to America in the 20th century. They slowly rose in popularity and eventually became the countrys most popular dog. Famous Poodles include author John Steinbecks dog Charley, subject of the book Travels with Charley: In Search of America, and Weird Als Poodle Bela, whouhm sat on his head for the album cover of Poodle Hat.

Toy Poodles have a shoulder height of up to 25 cm (10 in) and weigh 3-4 kg (6-9 lbs). Poodles are very elegant in appearance. They have a long, narrow muzzle, slight stop (point at which the forehead meets the muzzle), dark eyes, and wide ears. Toy Poodles have flat backs, straight, docked tails and small, oval feet. Their length is approximately the same as their height.

The Toy Poodle has a distinctive fine, frizzy, wooly coat similar in texture to sheeps wool. Solid white is most common, but the coat may also be solid grey, brown, apricot, or black. There are three distinct grooming styles for show Poodles: puppy clip, continental clip, and English saddle clip. The puppy clip entails shaving the face, throat, feet, and base of the tail. The upper legs and hindquarters are also shaved in the continental clip (currently the most popular), leaving pom poms around the ankles. The English saddle clip is similar, but the hindquarters are left mostly unshaved. All show clips require heavy maintenance, thus pet clips commonly entail shorter hair over the entire body. Poodle hair can be formed in a corded style, in which the hair is allowed to mat into long, thing rows rather than being brushed out. This is difficult to maintain, and now rare. Toy Poodles do not shed, making them a good match for allergy sufferers, for which reason they are commonly used for crossbreeding.

The Toy Poodle gets along well with other animals, other dogs, and children. It is best to socialize it as a puppy. Toy Poodles will announce the arrival of visitors, but are generally friendly toward them. Poodles are highly adaptable and make good watchdogs. They may find their way into some mischief! Small children should be watched around Toy Poodles to prevent snapping or rough play.

Show Poodles should be groomed by professionals, and will require a substantial investment of time and money. Poodles which are not intended for show competitions usually have longer hair on the head, legs, and ears, and are trimmed every five to six weeks. Toy Poodles have a long lifespan of 13-15 years. The Poodle is susceptible to cataracts and eye problems. Toy Poodles which are not shaven carefully can suffer skin irritation or rashes. Meals should be spread throughout the day to avoid bloat. Toy Poodles require frequent human companionship and should not be left to live outdoors.

The Toy Poodle is highly intelligent, making training a fairly simple process. They quickly understand what is expected of them and can learn a wide variety of tricks and games. Poodles are likely to enjoy the training process. Any effort put into training the Poodle will reap large rewards.

The Toy Poodle requires less exercise then the Standard Poodle, but should be walked or allowed to play outdoors. It should do fine with apartment life.