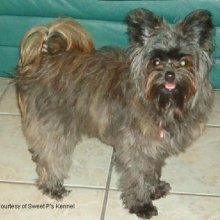 The Pomapoo (also known as a Pooranian, Pom A Poo, or Pompoo) is a cross between a Pomeranian and a Poodle. Poodle crossbreeds are meant to produce a dog with mixed traits and the Poodles signature nonshedding coat. As a crossbreed, the Pomapoo is not eligible for registration with purebred registries such as the American Kennel Club, but it can be registered with the American Canine Hybrid Club, as Pom A Poo. The Pomapoo is not considered a purebred because it doesnt breed true, meaning that it doesnt display a consistent set of characteristics. Like other designer breeds, the Pomapoo has seen a recent surge in popularity. Some breeders produce Pomapoos by crossing a purebred Poodle with a purebred Pomeranian (called a first generation cross), but others allow crossing Pomapoos with Poodles or Pomeranians (called a backcross), or with other Pomapoos (called a multi-generation cross). Different crosses can result in different characteristics.

The Pomapoo comes in a wide variety of sizes due to possible parentage by the Toy Poodle, Miniature Poodle, or Standard Poodle (though the latter is rare). The Miniature Pomapoo is most common, with a shoulder height of 8-12 in (20-30 cm) and a weight of 3-14 lbs (1-6 kg). Pomapoos can have a long, narrow muzzle like the Poodle or a wedge shaped head like the Pomeranian. They can have straight Poodle tails or the Pomeranians characteristic high-set tail, carried over the back. Most Pomapoos have medium sized, V-shaped ears, short neck, and straight back. The Pomapoo is longer than it is tall.

The Pomapoo coat may be straight, curly, or anywhere in between, and may also vary from short to medium length. The Pomapoo may be a variety of colors including black, white, and brown (most common). Pomapoos of various coat texture, length, and color may be born in the same litter. The Pomapoo sheds little to none, like the Poodle.

The Pomapoo should be brushed daily to keep the coat knot and tangle free. Straight coats require less frequent brushing and trimming. The Pomapoo has a lifespan of 10-15 years and an average litter of six puppies. Like other hybrids, Pomapoos tend to have fewer health problems than purebreds (known as hybrid vigor). Potential health problems are luxating patella (dislocated knee), patent ductus arteriosus (a heart defect), collapsed trachea, and cataracts.

The Pomapoo is intelligent and eager to please, making it easily trained. Positive reinforcement is best; harsh training methods will likely prove counterproductive.

The Pomapoo requires a moderate amount of exercise. It is fairly active indoors, but enjoys a daily walk or playtime outside. The Pomapoo is a good match for apartment life.