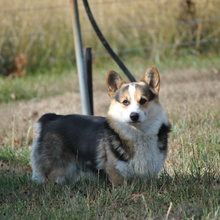 The Pembroke Welsh Corgi has a long, thick, water-resistant outer coat consisting of hard straight hairs, and a short undercoat. It can be red, sable, fawn, or black and tan, all with possible white markings on the legs, chest, muzzle, or blaze (vertical line between the eyes). White should not exceed 30 percent of the coat. The Pembroke Welsh Corgi may also have a fairy saddle of hair on the shoulders pointing in a different direction to the rest of the coat.