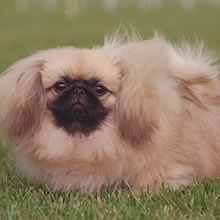 The Pekingese (also known as the Lion Dog, Foo Dog, Fu Dog, Peking Palasthund, and of course 宮廷獅子狗) is an ancient breed from China of unknown ancestry, though by Buddhist legend it was created from the mating of a lion with a butterfly, monkey, or marmoset. Peking is an old transliteration of Beijing, the capital city of China. The Pekingese has changed little in over 2000 years. It was bred by Lamaist Buddhist monks who believed lions embodied the essence of Buddha and sought to create a lion-like dog. Pekingese became companions for royalty, permitted to breed only in the Imperial Palace. During the Tang Dynasty (700-1000 A.D.) Pekingese were even considered to be royalty themselves, with personal servants at their disposal. Pekingese came to the west in 1860 when the British raided the Forbidden City and seized five Pekingese belonging to the Emperors Aunt, which were sent as a gift to Queen Victoria and other British royalty. They were highly popular back in England, gradually increasing in number and growing in popularity through modern day. In the early 20th century, the Chinese Empress Dowager Cixi presented a small black Pekingese named Manchu to President Theodore Roosevelts daughter Alice. Other famous Pekingese include romance novelist Barbara Cartlands white dog Peke and Sun Yat Sen, pet of Henry Harper from Harper Brothers Publishing, who, along with his owner, survived the Titanic disaster!

The Pekingese has a shoulder height of 15-23 cm (6-9 in) and weighs 3-6 kg (7-14 lbs). It has a very large, flat skull, flat muzzle, large eyes, nose located between the eyes, distinctive V-shaped wrinkle above the nose, heart-shaped ears and undershot bite. The Pekingese has a huge puffy tail carried over the back and large front feet turn slightly outwards. Its legs are bowed, supposedly to discourage wandering, but this dog can keep up a fast pace when necessary. The Pekingeses bowed legs give it a unique and entertaining gait.

The Pekingese has long, abundant hair. A variety of colors are possible, the most common being gold, red and sable. Other possible Pekingese colors are black and beige, white, black, cream, or blue. In the words of Chinese Empress Dowager Cixi For its color, let it be that of the lion - a golden sable, to be carried in the sleeve of a yellow robe; or the color of a red bear, or a black and white bear, or striped like a dragon, so that there may be dogs appropriate to every costume in the Imperial wardrobe.

The Pekingese requires a great deal of maintenance, including daily brushing, particularly on the belly and between the legs, and grooming every few months or when dirty. Powdering or dry shampooing is also required. Excessive hair around the pads of the feet must be trimmed. The Pekingese has a lifespan of 13 to 15 years. The most common issue is congestive heart failure, which does not usually surface until at least six years of age and can be treated successfully with prescription medications if diagnosed early. Other potential health issues for the Pekingese are breathing difficulties, eye problems (particularly eye ulcers), and skin rashes.

A Pekingese considers itself to be its own boss (if not the king of the house), but it can be trained through positive reinforcement. Patience is required when training the Pekingese.