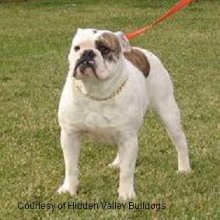 The Olde English Bulldogges shoulder height and weight varies, but it is usually at least 41 cm (16 in) tall and 23 kg (50 lbs) in weight. It has a compact, athletic body and large head with the distinctive Bulldog faceshort, wide muzzle, undershot jaw, and wide, droopy face giving the appearance of a frown. The Olde English Bulldogge has a short tail, rounded chest, and compact, muscular body. It is distinguished from other Bulldog mixes by its full pump handle tail.

Consistency is important, but the Olde English Bulldogge is highly sensitive to the tone of its handler's voice, making training a fairly simple process. It is inquisitive and quick to learn simple tasks, yet unpredictable as it is a bit stubborn on occasion.