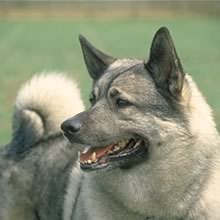 The Norwegian Elkhound's coat is made to endure the fiercest cold weather conditions. The heavy double coat feels thick and hard to the touch. The coat is gray with black at the tips and a lighter colored undercoat. The ears, muzzle and tip of the tail are black. Norwegian Elkhound puppies are born with an entirely black coat that will develop into the standard coat at around a week old.

The Norwegian Elkhound's coat requires a good deal of grooming, but the upkeep is simple. The coat should be brushed on a regular basis, with emphasis on the time of year when the Norwegian Elkhound sheds his undercoat. A rubber brush or a comb with double rows of metal teeth should be used to remove the dead hair that clings to the new hair. Excessive bathing will remove the natural oils of the Norwegian Elkhound's skin, so baths should only be given when necessary. This breed is a heavy shedder on a seasonal basis, however, there's none of that pesky dog smell from this arctic breed.

The Norwegian Elkhound, while very intelligent, is also very independent. This breed will learn commands with ease, however, they may not always follow them. It is necessary to be a very firm and consistent pack leader with this breed to ensure they know who's boss. Rules must be laid out for the Norwegian Elkhound and followed rigorously to ensure the dog does not develop bad behavior. It is necessary to make it clear to this dog that they do not out rank any member of the family.