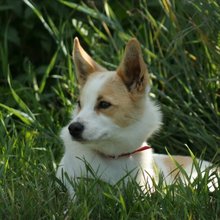 The Norrbottenspets originated in Sweden. They were first approved by the Swedish Kennel Club in 1910 but were thought to be lost due to the two World Wars. However, they made a comeback and the new breed standard was accepted in 1966. PLEASE NOTE: This breed has been accepted for recording in the AKC Foundation Stock Service (FSS). This is simply an avenue to maintain reputable records regarding the breeds development. This breed is not eligible for AKC (American Kennel Club) registration.

The Norrbottenspets double coat is hard, straight and dense. It lies close to the body.

Norrbottenspets are a very easy going and loving dog. They bond strongly to their owner.

The Norrbottenspets coat should be brushed regularly but only bathed when necessary. This breed is generally easy to care for.

The Norrbottenspets is very intelligent and thus easy to train but do get bored with repetitive commands.