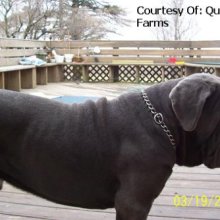 The Neapolitan Mastiff (also known as the Neo, Mastini, or Italian Mastiff) is an Italian breed named after the region of Naples, where most of its development occurred. The Neapolitan Mastiffs ancient origins are with the Molossians, an early Hellenic tribe known for its powerful guard dogs. In 326 B.C., King Porus of Punjab gave Alexander the Great a pair of Neapolitan Mastiffs which proved quite popular. These dogs were bred widely, producing many offspring which were adapted by the Romans as war dogs and fighters. They were also pit in the Arena against gladiators, bears, and even elephants. The dogs were later crossed with fierce British guard dogs, producing an even larger, more powerful breed resembling the modern Neapolitan Mastiff. It was discovered near Naples in 1946 by Piere Scanziani, who standardized the breed and promoted its development. Few Neapolitan Mastiffs arrived in America until the 1970s. They were fully recognized by the American Kennel Club in 2004. Neapolitan Mastiffs have inspired portrayals in fictional literature including Fang from Harry Potter and Pansy from Andrew Vachss series of Burke detective novels.

The Neapolitan Mastiff has a shoulder height of 60-75 cm (23-30 in) and weighs 50-70 kg (110-150 lbs). It has a large, droopy, wrinkled head with large flews (upper lips) and dewlap (wrinkled folds beneath the chin), deep set eyes which are almost entirely covered by folds, and pronounced stop (depression where the muzzle meets the forehead). Loose folds of skin cover nearly the entire body. Neapolitan Mastiffs have a flat back, round feet, and low-hanging tail docked to two-thirds its natural length.

Neapolitan Mastiff training must be conducted in an atmosphere of mutual respect, with consistency and understanding. This breed is a bit obstinate, but will obey once it understands what is expected of it and recognizes its owners authority. Obedience training at a young age is recommended. Neapolitan Mastiffs are happy to learn, but may refuse to perform tricks they consider pointless.