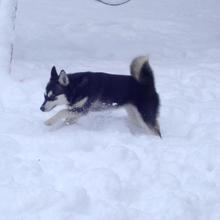 ﻿The Alaskan Klee Kai is a part of its pack. They require a good amount of face time with their owners and would prefer to follow them wherever they go. However, the AKK is cautious and will not immediately warm up to strangers or unfamiliar situations. They do have wonderful watchdog potential, as they are extremely loyal and alert as well as prone to barking. The Alaskan Klee Kai can become a high strung dog without the right level of activity.

﻿The Alaskan Klee Kai is an average shedder and should be brushed on a regular basis. They also should receive baths only when necessary. They are relatively easy to care for. One nice thing to note about the Alaskan Klee Kai is that it is not typical for it to have doggy odor or bad breath. So feel free to get close to your puppy and give it lots of love. The Alaskan Klee Kai has very few genetic defects to speak of. Some of the few health concerns associated with this breed are: Juvenile Cataracts, Liver Disease, Extreme Shyness, Factor VII Deficiency, Pyometra, Luxating Patella, Cryptorchids and Cardiac Issues Including PDA. Also, this breed is relatively young and other health issues could still arise.

﻿The Alaskan Klee Kai is an intelligent breed and is a fairly quick learner. The AKK requires a firm and consistent pack leader during training and would benefit greatly from obedience school. The breed has the propensity to develop small dog syndrome', so it is imperative that the dog knows who's boss.

﻿The Alaskan Klee Kai is not a breed for those who live a sedentary lifestyle. This breed needs daily exercise and should be taken on a daily long walk. A larger area that provides space to play is fitting for the AKK, as their ideal day consists of more play than anything else!