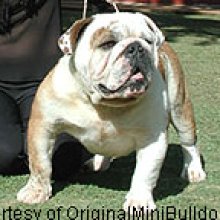 The Miniature Bulldog (bred from the English Bulldog) was bred in England in the 1500s for bull baiting, a popular gambling sport in which one or more dogs were matched up against a chained bull (or bear). These dogs were bred for sheer fighting capacity, and they were famed for latching onto their prey with an iron jaw which they refused to releasethey could even suffocate opponents this way. English Bulldogs fell in popularity when bull baiting was outlawed in the 1830s, but a committed group of devotees kept the breed alive and selected away any trace of ferocity. Easily recognizable by their distinctive and adorable sourmug, English Bulldogs serve as the mascots of dozens of sports teams, most famously Georgetown University. Famous English Bulldogs include Handsome Dan, the Yale mascot, and Tyson, the skateboarding Bulldog of internet fame. Miniature Bulldogs are simultaneously a symbol of British tenacity and an immensely popular American pet. PLEASE NOTE: Also classified as a Miniature Bulldog is the English Bulldog or Olde English Bulldogge and Pug cross. A mixed breed dog can have a combination of any of the temperament and characteristics of any breed involved. It is recommended that you thoroughly research all breeds involved in your mixed breed puppy to ensure that you are amenable and prepared for any of the possibilities. The designer cross is recognized by the American Canine Hybrid Club, Designer Dogs Kennel Club and Designer Breed Registry.

The Miniature Bulldog has a shoulder height of 10-12 in (25-30 cm) and weighs 11-18 kg (25-40 lbs). It is known for its short, wide muzzle, undershot jaw, and wide, droopy face giving the appearance of a frown. Miniature Bulldogs have short legs and tails, rounded chests, and compact, muscular bodies.

The Miniature Bulldog has a short, smooth, glossy coat which can be beige, mottled, brindle, or white.

Miniature Bulldogs enjoy mixing with other dogs and household pets. They are great with children, well behaved, adaptable, comfortable companions with an affectionate nature and even disposition. Some Miniature Bulldogs are cautious with strangers, but most are friendly to everyone. They are likely to drool or snore.

When the Miniature Bulldog is shedding, use a rubber brush to remove dead hairs. A special lotion will occasionally need to be applied to the facial and tail folds to keep them clean; soft tooth brushing with an approved toothpaste is also recommended. The Miniature Bulldog has a lifespan of 8-12 years. Due to its facial features, it is susceptible to breathing problems and skin infections, and many are delivered via Caesarean section because of the large head. Most Miniature Bulldogs cannot swim and are averse to hot weather.

Consistency is important, but the Miniature Bulldog is highly sensitive to the tone of its handler's voice, making training a fairly simple process. It is inquisitive and quick to learn simple tasks, yet unpredictable as it is a bit stubborn on occasion.

The exercise needs of the Miniature Bulldog are uncomplicated. It will adapt itself to the activity level of your family. Sufficient rest is key to development of healthy bones, muscles, and jointsdo not expect your Miniature Bulldog to run long distances or jump down from tall ledges. Miniature Bulldogs are well suited to apartment life.