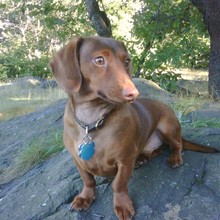 The Miniature Dachshund has a chest girth of 30-35 cm (11.75-13.75 in) and weighs up to 4 kg (9 lbs). All Dachshunds have an arched muzzle, almond shaped eyes, round ears, and straight tail. They are recognizable by their long, flat bodies and short legs. Writer H.L Mencken famously referred to them as a half-dog high and a dog-and-a-half long.