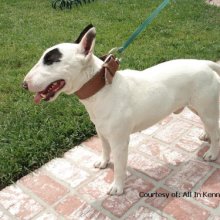 The Bull Terrier (also known as an English Bull Terrier) was bred in England in the 1830s by crossing a Bulldog with an English Terrier in an effort to build the ultimate fighting dog. The Bull in Bull Terrier derives from the popular practice of bull-baiting, in which several dogs were matched up against a chained bull. The Bull Terrier was later bred with the Spanish Pointer to increase its size, resulting in a highly successful, powerful, persistent fighter. After dog fighting was abolished, Bull Terriers were bred with the Dalmatian to produce a white colored strain, then again with the Staffordshire Bull Terrier to reintroduce color. Both the white and colored types increased in popularity as pets, and both strains remain today. Famous Bull Terriers include the Target mascot Bullseye, Spuds MacKenzie, who was used in Bud Light commercials (and later discovered to secretly be a female!), and Patsy Ann, a Bull Terrier from Juneau, Alaska famous for unfailingly predicting the impending arrival of ships to port. The Miniature Bull Terrier was first recognized by the American Kennel Club in 1992.

The Miniature Bull Terrier has a dense, short-haired coat. It can be all white (with possible markings on the head), or a solid color with highlights. Acceptable colors are solid black or a mix of tan with either white, red, broken black, or fawn. Miniature Bull Terriers are average shedders, shedding twice a year.