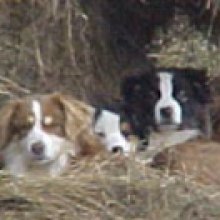 The Australian Shepherd (affectionately called an Aussie) does not actually originate in Australia. It is believed that some Basque farmers brought ancestors of these dogs with them when they emigrated to Australia, then subsequently to the United States during the 1849 California gold rush. However, the breed as it is known today was developed in the American Southwest over the next few decades. The Australian dog was crossed with several breeds in an effort to produce an animal able to deal with the harsh temperatures and demands of the American West. Breeding during this period was mainly focused on abilityspeed, agility, and endurance--rather than appearance, which delayed the Australian Shepherds recognition as a breed. Australian Shepherds became popular pets after they were featured as rodeos performers in the 1950s, and later in Disney films such as Run Appaloosa Run. The Miniature Australian Shepherd was created by selectively breeding small Australian Shepherds. It has increased in popularity in the last few years due to its combination of small size with high energy level and endurance. PLEASE NOTE: This breed has been accepted for recording in the AKC Foundation Stock Service (FSS). This is simply an avenue to maintain reputable records regarding the breeds development. This breed is not eligible for AKC (American Kennel Club) registration. In addition, since May 2011, the AKC recognizes this breed as the Miniature American Shepherd.

The Miniature Australian Shepherds coat ranges from medium to long, with a dense undercoat. It can be straight or slightly wavy, and is highly weather resistant. The coat is short and soft on the head and legs, with a thick mane around the neck. The Miniature Australian Shepherd can be black, red, red merle (dark patches on a light colored background), or blue merle. All may have white markings or tan points.

The Miniature Australian Shepherd is fun to train because it learns quickly and easily. Aussies are unusually eager to please and adept at a wide variety of sports and games, such as herding, Flyball, and agility competitions.