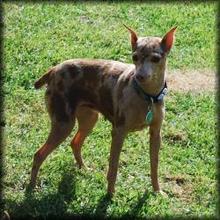 Germany is the country of origination for the Harlequin Pinscher. The original breed standard was established in 1880, and included a merle/harlequin as well as a double merle version. However, in the 1920's due to controversy, the Harlequin version of the Miniature Pinscher was removed from the breed standard and was forced to start their own breed classification. It is believed that a merle hound or herding dog was infused into the breed to create the harlequin pattern, as this pattern was not seen in any terrier breed previously. There is unfortunately, no documentation to prove or disprove this theory, and so the specific origins of the breed may never be known.

The Harlequin Pinscher weighs in typically between 22-26 pounds with a height between 12-14 inches. They have an elongated head with a broad skull and pointed muzzle and should exhibit a scissor bite. The eyes are dark and their ears are typically cropped. The body should be barrel shaped and well muscled. The forelegs should be straight while the hind legs are angular. The tail should be docked and set high.

The Harlequin Pinscher's coat should be short and smooth. The acceptable patterns based on HPA(Harlequin Pinscher Association) standards are: Merle, Piebald, Brindle, Merle/Piebald, Merle/Brindle and Brindle/Piebald.

While the Harlequin Pinscher is fearless, due to their laid back nature, they are not suitable for ratting. This breed is extremely loyal and will make an ideal indoor family pet.

This breed's smooth, short coat makes for simple maintenance. The Harlequin Pinscher requires only the occasional brushing and bath when necessary.

The Harlequin Pinscher is a highly intelligent breed, making them relatively easy to train. However, the Packmaster should establish their position from the very beginning and will need to be confident and consistent when training.

Regular play and a daily walk should satisfy the exercise necessary for the Harlequin Pinscher. Wide open living spaces will allow the breed to exercise themselves well, however, if they reside in smaller indoor living spaces, the daily walk is a necessity.