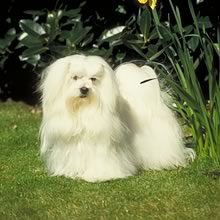 The Maltese (also known as the Bichon Maltiase) is the most ancient toy breed of Europe, hailing from the Mediterranean island Malta, an ancient trading port. The first written evidence of the Maltese comes from the third century B.C. Over the centuries this breed has been known by many names, including the Shock Dog, Maltese Lion Dog, Spaniel Gentle, Comforter Dog, Roman Ladies Dog, and my personal favorite, Ye Ancient Dogge of Malta. The name Maltese was only assigned in the 20th century. The breeds origins are unknown; it may descend from Spitz or an Asian breed such as the Tibetan Terrier. Maltese may have been used to hunt rodents before their royal appearance became paramount. In any case, the small, white Maltese remained isolated on the island of Malta for centuries and hence stayed true to breed. Eventually, they were exported throughout Europe and became popular with the upper class, purportedly including Mary, Queen of Scotts, Josephine Bonaparte, and Marie Antoinette. The Maltese was first imported to America in the 1870s and recognized by the American Kennel Club in 1888. Today it is a popular show dog. Publius, Roman governor of Malta in the early first century A.D, had a Maltese named Issa who was immortalized by poet Marcus Valerius Martialis: Issa is more frolicsome than Catulla's sparrow, Issa is purer than a dove's kiss. Issa is gentler than a maiden. Issa is more precious than Indian gems...Lest the last days that she sees light should snatch her from him forever, Publius has had her picture painted.

The Maltese has a shoulder height of 20-25 cm (8-10 in). Maltese have a domed skull, round dark eyes surrounded by a dark halo, wide, black, nose, and low ears covered by long hair. Some have a winter nose which fades to pink in the winter; the color change can be permanent in older dogs. The Maltese carries its tail over the back and to one side and has small, round feet.

The Maltese has a distinctive long, white, silky coat with no undercoat. Some standards allow cream or lemon colored ears. The Maltese does not shed and is a good match for those with allergies.

Maltese easily befriend other dogs and cats, even much larger ones. Maltese puppies may be too playful for small infants. Maltese will bark at strangers but grow used to them quickly.

The Maltese requires quite a bit of grooming, from daily brushing and combing to special lotions to remove tear stains (careful brushing with a warm metal comb works as well). Dead hair should be brushed out, as the Maltese does not shed. Irritating hairs around the eyes need to be removed. Some pet Maltese are trimmed in a puppy cut of 1 to 2 inches in length over the entire body for easier maintenance. Some show dogs are wrapped to prevent matting of the fur. The Maltese has a lifespan of 12-14 years, though some live as long as 18 years. Most are healthy, but some are prone to heart issues such as prolapsed valve syndrome and enlarged ventricle, which usually present around the 10th year and can be controlled with medication. Many Maltese have dental issues. They can begin losing teeth by the age of 8 if not properly cleaned. Maltese are prone to sunburns where their hair parts. They get cold easily in chilly climates but can also become quickly overheated as they do not easily dissipate heat.

Encouragement rather than harsh words should always be used when training the Maltese. They are very sensitive. Maltese are very difficult to housebreak and may need to be paper or box trained.

The Maltese does not require a great amount of exercise. It can have its needs met by indoor play and activities, and enjoys playing chase. Maltese are well suited to apartment life.