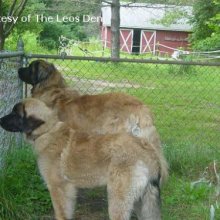 The Leonberger is named after the city of Leonberg in southwest Germany, where it was developed from the Saint Bernard, Newfoundland, and Pyrenean Mountain Dog in the early 1800s. Heinrich Essig, a prominent politician who made a living trading dogs, is credited with developing the breed. There is some controversy as to whether the early Leonberger was in fact a distinct breed or merely a successful marketing ploy, as no standard for the Leonberger was created in Essigs lifetime. According to legend, the Leonberger was bred to resemble the lion on Leonbergs coat of arms, but early Leonbergers were actually mostly white; the modern brown and black masked coloring developed in the 19th century, likely as a result of further crossbreeding. The Leonberger was used to protect livestock and pull heavy loads. Most were lost in World Wars I and II, with only eight dogs reported as surviving the second war. All Leonbergers today descend from those eight survivors.

The Leonberger has a shoulder height of 27-31 in (69-79 cm) and weighs 100-170 lbs (45-77 kg). It is a large, muscular dog, but elegant in its movements. The Leonberger has a moderate stop (depression where the muzzle meets the forehead), black nose, long muzzle, scissor or pincer bite, brown, oval eyes, and high-set pendant ears. Leonbergers have a moderately long neck, flat back, deep chest, and muscular legs.

The Leonberger is known as a gentle giant. It has a friendly personality and loves everyone, including children, strangers, dogs, and other pets. Young children should be watched around the Leonberger due to its considerable size. The Leonberger is highly patient and sensitive with a strong desire to please.

The Leonberger should be brushed weekly, daily when shedding. Bathe only when necessary. Leonbergers are susceptible to a number of health problems which effect large breeds generally, such as hip dysplasia (malformed hip joint which can cause lameness or arthritis), osteochondritis (cracked cartilage causing pain in the joints, most common in the shoulders), entropion and ectropion (curled eyelid which can scratch the cornea), sensitivity to anesthesia, and bloat, which is potentially fatal. Bloat can be prevented by feeding from a raised dish, spreading meals throughout the day, and avoiding exercise immediately after meals.

The Leonberger does not respond to harsh training methods; positive reinforcement is best. Patience is required. Early socialization and obedience training are highly recommended.

The Leonberger requires only moderate exercise and is relatively inactive indoors, but even so it is not recommended for apartment life due to its considerable size and energy. The Leonberger prefers cooler climates and enjoys spending a lot of time outdoors, though it shouldnt be made to sleep outside as it requires socialization with humans. Most love to swim.