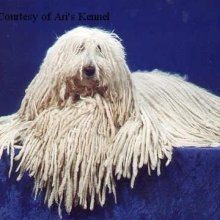 The Komondor (also known as the Hungarian Komondor or Hungarian Sheepdog, Komondorok is sometimes used for the plural noun) is a Hungarian breed. The name Komondor means of the Cuman indicating the Komondors origin with the nomadic Cuman tribe which settled in Hungary in the 1100s. Another theory is that the Komondor, like the Puli, which shares its remarkable curls, came to Hungary with the Magyar tribe. The Komondor may be related to the large white South Russian Ovtcharka. It served to protect sheep herds from predators, particularly wolves. By some tales, the Komondor was such a skilled fighter that the Hungarian wolf went nearly extinct once it came to prominence. The Komondor was imported to America in 1933 and recognized by the American Kennel Club in 1937. Many European Komondors were killed during World War II, probably because they courageously defended their homesteads. Due to the Komondors high grooming requirements, it is still fairly rare outside its native Hungary, though in recent years quite a few have been employed as flock guardians in the Western United States, a trend spurred by the rise in coyote population.

The Komondors long, white, thick, naturally corded coat is its defining feature. The coat begins cording at one to two years of age. The coat protects the Komondor from cold weather, but it is not well suited to wet weather. The thick coat provides protection from attacking predators and allows the Komondor to blend in naturally to a sheep herd when necessary. The Komondor sheds little to no fur.

The Komondor is somewhat territorial and can be reserved with strangers, but it will accept them once it understands they present no danger. The Komondor should be socialized when young so it does not grow averse to new people and pets. If socialized, it will actually enjoy the company of another dog. The Komondor is good with older children but should be supervised around young children as it may bite if it is harassed.

The Komondors coat must have its cords regularly separated by hand to remove dirt. It must be bathed occasionally to prevent fleas or ticks from collecting in the large coat. When wet, the Komondor takes hours or even days to dry off. The Komondor can be clipped but this removes a lot of the breeds distinct appeal. The Komondor has a lifespan of 10-12 years. Common health problems include hip dysplasia (malformed hip joint which can cause lameness or arthritis), eye problems such as cataracts or entropion (curled eyelid which can scratch the cornea), and bloat, a potentially serious health problem which can be prevented by feeding from a raised dish, spreading meals throughout the day, and avoiding exercising your Komondor immediately after meals.

The Komondor requires firm, consistent training at an early age because it will be very large, strong, and fast when fully grown. Obedience training is strongly recommended. A praise-based approach with plenty of variety will likely yield the best results.

The Komondor requires daily exercise such as a walk or playtime in the yard. Swimming may not be a great idea as this dog takes a long time to dry off.