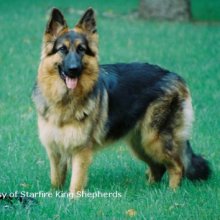 The King Shepherd is a large-sized German Shepherd Dog. The German Shepherd Dog was bred in the late 19th and early 20th century in a concerted effort to breed the ultimate sheepdog. Contrary to popular opinion, it is no more closely related to the wolf than any other breed of dog. A consortium of German breeders worked to make a brave, intelligent dog that could herd sheep and run quickly with great stamina. They produced an agile, powerful dog which quickly showed its usefulness at police work and guarding. German Shepherd Dogs became the most popular breed in America after the rise of German Shepherd movie star Rin Tin Tin, who thrilled audiences with astounding skills such as leaping nearly 12 feet high. Rin Tin Tin was known to dine on tenderloin steaks prepared by a personal chef. While no longer the countrys number one breed, the incredibly adaptable German Shepherd Dog is today a popular guard dog, police dog, guide dog, search-and-rescue dog, drug-sniffing dog, and pet. The King Shepherd was bred by American breeders in the 1990s by crossing the German Shepherd Dog with the Alaskan Malamute and Great Pyrenees in an effort to make a larger variant.

The German Shepherd Dog has a shoulder height of 56-66 cm (22-26 in) and weighs 35-39 kg (77-85 lbs). German Shepherd Dogs with a shoulder height over 64 cm (25 in) and weight over 41 kg (90 lbs) are sometimes called King Shepherds, but this breed is not recognized as distinct by the American Kennel Club. They are a long, muscular dog with a black nose, powerful scissors bite, wide, erect ears, and intelligent, almond-shaped eyes. King Shepherds have a flat back, bushy, low hanging tail, muscular legs and chest, and short, round feet. They are the image of power and dignity.

King Shepherds have a long-haired coat which may be coarse or wavy, and may not have a double coat. The prototypical King Shepherd is tan with a black back and mask, but King Shepherds come in a variety of colors including solid black, grey, brown, and yellow, tricolor (black, white, and brown or red), or sable (black and red, silver, or tan), plus a variety of marking designations including penciling (black lines on the toes) and tar heels (black on the back of the leg). King Shepherds may not be white, though in some countries this is considered a separate breed.

King Shepherds are highly territorial, making them among the least likely of breeds to run away from a fight. They are not friendly towards strangers and will stop unwanted visitors. The King Shepherd gets along fine with children and other animals, provided proper socialization has taken place, but does not prefer the companionship of other dogs.

The King Shepherd should be brushed weekly. During shedding, a special comb to remove dead hairs may be required. Like other large breeds, King Shepherds are susceptible to elbow and hip problems. Meals should be spread throughout the day to avoid bloat. The King Shepherd has a life span of 10-14 years.

King Shepherds are eager pupils and are quick to learn new tricks. They are most responsive to their owners voice. The King Shepherds versatility makes them suitable for a wide variety of activities including dog sports. Obedience training is recommended for the King Shepherd due to its immense size.

King Shepherds are happiest when doing some type of work, such as agility, obedience, or police trials. Over-exercising when young can cause damage to growing bones, joints, and muscles. The King Shepherd prefers a yard to play in, but can tolerate life in an apartment if sufficient exercise is provided.