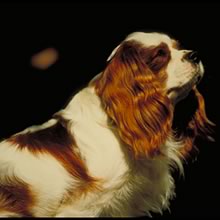 The King Charles Spaniel (which is its British namethe American name is English Toy Spaniel) was created by crossing small Spaniels with a short snouted breed such as the Pug or Japanese Chin. It was brought to Scotland from Continental Europe (possibly by Mary, Queen of Scots) in the 1500s or 1600s, where it became a fashionable lap dog and companion for the noble class. King Charles Spaniels were also popular lap warmers (and flea magnets) for the lower class. King Charles II, for whom the breed is named, grew up with a pet King Charles Spaniel (then known as the Toy Spaniel), and was such a big fan of the breed that he was accused of neglecting his official duties to spend time with his pet Spaniels. He once issued a decree that the breed could not be forbidden entry to any building, including Parliament! Some King Charles Spaniels, such as the red and white Blenheims, served as hunting dogs, but most strains were bred for appearance rather than work capacity. Over the years, the breed became smaller with a shorter nose. It continues to this day as a popular pet.

The King Charles Spaniel has a shoulder height of 25-30 cm (10-12 in) and weighs 4-5 kg (9-12 lbs). It has a large, round head with a deep stop (point at which the muzzle meets the forehead), large, wide eyes, long, feathery ears and a square, undershot jaw. King Charles Spaniels have flat, silky tails which are docked at 4 in or less. Their pug-like snout, round head and lively colors give them a distinct and attention-grabbing appearance.