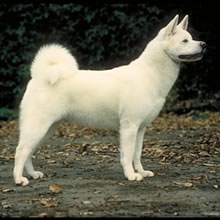 The Japanese Akita (also known as Akita Inu or just Akita) is one of the best known Japanese breed. The Japanese Akita was bred as a fighting dog in medieval times, and redeveloped in the 1800s as part of an effort to restore several ancient Japanese breeds. In 1918, the Akita Inu Hozankai Society of Japan was created to preserve the breed, which was subsequently designated a natural Japanese monument in 1931. In 1937, Helen Kellers guide dog became the first Japanese Akita to arrive in the United States. The Japanese Akita grew in popularity in America after World War II, when many soldiers returned home from Japan with them. Today, they are popular American pets and serve as guard and police dogs in Japan. The worlds most famous Japanese Akita, Hachiko, greeted his owner at a train station after work every day. After his owners death, Hachiko continued to faithfully visit the train station every day to wait for his owner, until he died nine years later. Today a statue of Hachiko stands at the train station and an annual ceremony is held in his honor.

The Japanese Akita has a double coatthe outer coat composed of straight and coarse hair, and the undercoat soft and dense. The hair on the head and legs is short. Permitted colors for Japanese Akitas are red, white, and streaked. Pinto is not accepted. The Japanese Akita sheds its coat twice a year.

The Japanese Akita is brave and smart, and requires a lot of human companionship. Japanese Akitas should be allowed to live indoors (though they can tolerate the outdoors in cool climates) and given plenty of attention. They are highly protective and territorial. Japanese Akitas prefer not to have other dogs around, and should become acquainted with cats and other household pets early in life to avoid aggressive behavior. They get along with children, preferably older children, but they must be given personal space. The Japanese Akita is not fond of strangers.

The Japanese Akita should be brushed weekly to remove dead hair, and should be groomed with a metal-toothed comb twice a year, when it is shedding. To avoid removing natural oils from the coat, it should be bathed lightly with a mild shampoo only when absolutely required. The hair on the bottom of the webbed feet should be trimmed occasionally. Japanese Akitas are prone to hip dysplasia and may encounter eye and knee problems. Japanese Akitas have litters of 5-7 pups and a life span of 9-11 years.

A confident and consistent approach is required to train a Japanese Akita. Repetitive drills or overly harsh training hinder the process. Japanese Akitas are easily housetrained. They must be socialized young if they are to live with other pets.

Japanese Akitas have considerable stamina and should be physically and mentally stimulated as much as possible. They should be walked on a leash or provided an enclosed area for activity. Japanese Akitas enjoy active playtime with family. They can adapt when not exercised for a time, but may be less quiet and obedient. Japanese Akitas can tolerate apartment life provided they receive sufficient exercise.