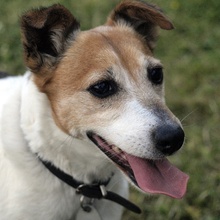 The Jack Russell Terrier derives its name from the Reverend John Russell, a fox hunter from mid-nineteenth century England who bred terriers to produce a dog which could run as fast as a horse and catch and kill a fox. He was very successful, and his breed became popular with a number of enthusiasts almost immediately. It was more popular as a working dog than a show dog because it is first and foremost a hunting dog. However, Jack Russell Terriers are shown and do well, especially in field trials.

The Jack Russell Terrier can be aggressive with other dogs and should be socialized when young if possible. It is however, still a hunting dog, so don't expect it to cuddle up with your gerbil or guinea pig. It's natural hunting instinct will kick in and could result in the chasing of the family cat. It may try to be dominant over other dogs, regardless of size. Jack Russell Terriers are fearless. Visitors will always be announced with a distinctive bark.

The Jack Russell Terrier has a seemingly inexhaustible supply of energy. It must be given many opportunities to burn it off. Jack Russell Terriers need to run and play, and enjoy agility skills and playing catch. Digging, barking, and staging escapes are their way of telling you they need more exercise. Jack Russell Terriers are happiest on a farm or a home with a large backyard where they can frolic, and will not enjoy life in an apartment. Their hunting instinct is strong and they need to be monitored if off-leash and out of their yard as Jack Russell's have been known to go to ground after a quarry and stay to ground for days.