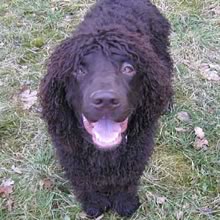 The current stock of Irish Water Spaniel (also known as the Whiptail, Shannon Spaniel, Rat Tail Spaniel, or Bog Dog) is of Irish origin, but its original ancestry is unknown. The Poodle, Portuguese Water Dog, and Barbet are all closely related to the Irish Water Spaniel, but no one is certain which breed descends from the other. The Irish Water Spaniel is the oldest and perhaps most unique Spaniel breed, depicted in manuscripts from as early as the 1100s. The modern breed was developed in Dublin, Ireland in the 1830s by Justin McCarthy. His Irish Water Spaniel Boatswain sired many dogs and is widely considered the father of the breed. The Irish Water Spaniel was recognized by the American Kennel Club in the late 1800s. It had a brief period of popularity, but is today a somewhat rare pet and show dog.

The Irish Water Spaniel coat requires brushing and combing several times a week, but excessive grooming will cause the coat to fluff, which is undesirable. After brushing, the Irish Water Spaniel should be washed or allowed to swim, which will help retain its naturally curly texture. The Irish Water Spaniel has a lifespan of 10-12 years. It is susceptible to hip dysplasia (malformed hip joint which can cause lameness or arthritis), distichia (extra eyelashes on the eyelid which can scratch the cornea if not properly treated), and ear infections, which can be prevented by regular cleaning of the ear passages.