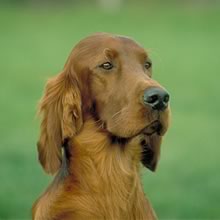 The Irish Setter, also known as the Irish Red Setter or Red Setter, originated in Ireland. The breed was developed by mixing the Irish Terrier, Irish Water Spaniel, English Setter, Pointer and Gordon Setter breeds. The original red and white coat and shorter legs of the Irish Setter were selectively bred out, leaving today's recognizable red coat. It is believed that the originally lower stature was in order for the dog to set its prey. Meaning that the Irish Setter would stand hovering low to the ground above the caught game in order for the hunter to walk over and throw a net over both the prey and the dog. The Irish Setter is an jack of all trades in the hunting arena. This breed is an excellent pointer as well as retriever and is especially good for hunting game birds. The Irish Setter is coveted for it's fantastic nose and quick feet. However, over time the Irish Setter's have been bred more for their looks and the show ring than for their excellent hunting ability.

The Irish Setter male will typically reach heights of 26-28 inches while the female is slightly smaller at 24-26 inches. The male will reach an average weight of 65-75 pounds with the female weighing in at 55-65 pounds.

The Irish Setter's coat should appear short and fine at the head and back. There is long feathering on the tail, ears, legs, undercarriage and chest areas. The color of the Irish Setter will always be a variation of red. This can appear as a lighter mahogany all the way to a deep chestnut. It is acceptable for the Irish Setter to exhibit small amounts of white on the chest, neck, top of head, or toes however, there should never be any black markings. It is common for Irish Setter puppies to exhibit small amounts of silver colored hair behind the ears. This will typically disappear as the puppy grows.

The Irish Setter has an independent spirit which may make it difficult to train, however, they do respond with a firm but gentle hand and plenty of exercise. The Irish Setter can become high strung and even destructive without proper mental and physical exercise. The field type Irish Setter will have a higher exercise drive that the bench(show) type, however they will both require exercise. They are very quick and have a great sense of smell. The Irish Red and White Setter is a hardy dog and does well in any climate, including wet terrain.

The Irish Setter requires daily brushing to prevent the fine feathered coat from becoming tangled. Excess hair between the pads of the feet and under the ears must also be trimmed. Bathe your Irish Setter only when necessary.

Irish Setters take to training well. Handlers must be consistent in approach. It may be necessary to take the dog to a puppy training course. Young Irish Setters need to be trained when young to return when you call them.