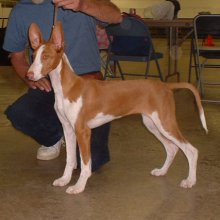 The Ibizan Hound, also known as the Podenco Ibicenco, Ibizan Warren Hound, Ibizan Podenco and Ca Eivissenc originated in Eivissa, one of the Balearic Islands. The Ibizan Hound, while very similar to the Pharaoh Hound, can be distinguished by it's larger size and coat color. The breed was primarily utilized in areas such as Spain and France for hunting small game, mainly rabbits. The Ibizan Hound's ability to hunt in any terrain using their excellent speed, sight and hearing made them ideal hunters for local farmers. It was not uncommon for an Ibizan Hound to hunt for his master and then go back to hunt for himself, as these animals were not fed by their owners. When the hunters took the Ibizan Hound out to hunt, their pack would consist mainly of females with only one or two males, as the female was revered as the better hunter. There is a good deal of controversy regarding whether or not the Ibizan Hound can be listed among the ancient dog breeds. Drawings on the walls of ancient tombs led experts to believe through striking similarity that the Ibizan Hound was in fact quite ancient, however, recent DNA tests do not support this theory. Some experts say though, that with better tools, it is very likely that the Ibizan Hound could be traced back thousands of years.

The Ibizan Hound will typically reach heights of 22-29 inches and an average weight of 42-55 pounds.

The Ibizan Hound is a very loving and comical breed. They greatly enjoy clowning around for the entertainment of their family and are known to get along well with children. The Ibizan Hound is very attached to their family and will prefer to be with them as much as possible. Due to this the Ibizan Hound is not recommended for kennel living. They are also quite protective of their family and will be suspicious of any stranger until it has been made clear that they mean no harm. The Ibizan Hound will do well with other dogs as well as cats as long as they are raised together from a young age. The addition of a new adult dog should be handled by taking the two animals on a Pack Walk, allowing both dogs to understand that you, the pack master, are in charge. While the Ibizan Hound will likely love the family cat that it was raised with, they will likely chase and even kill a cat it doesn't know, so they must be kept under close supervision.

No variety of the Ibizan Hound requires an extensive amount of grooming. The occasional brushing will suffice. Be sure to keep your Ibizan Hound's ears clean and nails trimmed.

The Ibizan Hound is a quick learner, and is eager to do so. However, a meek or timid pack master breeds a stubborn and willful Ibizan Hound. Be sure to exert your authority as pack master during training to ensure the dog knows his place in the pack.

Although they are willing to adapt to their living situation, Ibizan Hounds need a great deal of exercise. Outdoor activities where they can run freely will keep them content. They have a strong hunting instinct, so be sure to keep your Ibizan Hound on the leash at all times.