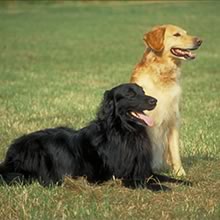 The Hovawart, which means estate guard, originated in the Black Forest region in southwest Germany in the 13th century or earlier. One of the first recorded mentions of the breed was a Hovawart who reportedly saved Eike von Repkow, a German lawmaker, during the overthrow of castle Ordensritterburg in 1210. By the late 1400s, the Hovawart was notable enough to be included in Heinrich Mynsingers list of The Five Noble Breeds. The breed was praised for its ability to track thieves and criminals. With the rise of the German Shepherd as a guard dog, the Hovawart slowly began to decline in popularity, becoming somewhat rare by the 1900s. In 1915, Kurt Friedrich Konig and other supporters led an effort to recreate the Medieval style Hovawart, basing their target on ancient writings and illustrations. The group located Hovawarts in their native land of the Black Forest and crossed them with Newfoundlands, German Shepherds, and Bernese Mountain Dogs. The first Hovawart litter was accepted by the German Breeding Registry in 1922. World War II caused a substantial setback for the Hovawart, but it continues to grow in popularity both in its native Germany and worldwide. PLEASE NOTE: This breed has been accepted for recording in the AKC Foundation Stock Service (FSS). This is simply an avenue to maintain reputable records regarding the breeds development. This breed is not eligible for AKC (American Kennel Club) registration.

The Hovawart has a shoulder height of 23-28 in (58-70 cm) and weighs 55-90 lbs (25-51 kg). It has a wide skull with oval eyes, scissors bite, and high-set, triangular drop ears. It is slightly longer than it is tall, with muscular legs and a tail carried high when active but low when at rest.

The Hovawart has a long-haired, wavy coat which lies flat. It can be black, blonde, or black and gold. Black and gold is most popular, composed of a shiny black and medium to brown gold. Gold markings should be on the face below the eyes and nose, thumbprints above the eyes, and on the chest and toes.

The Hovawart gets along well with children, other dogs, and any household pets, provided early socialization has taken place. Hovawarts are suspicious of strangers, making good watchdogs. They will relax once they understand that no danger is presented.

The Hovawart requires only regular grooming with a brush and comb. It is a generally healthy breed, but susceptible to common health problems such as hip dysplasia (malformed hip joint which can cause lameness or arthritis), osteochondritis (cracked cartilage causing pain in the joints, most common in the shoulders), liver shunt, and hypothyroidism.

The Hovawart must be trained with a consistent, well-balanced and loving approach. Positive reinforcement is the recommended technique. Firmness and patience are required. It is well suited to search and rescue or tracking. Many Hovawarts enjoy dog agility events, especially females.

The Hovawart is a working breed requiring a moderate amount of exercise, such as a long daily walk or playtime in a fenced-in yard. It will adapt itself to the activity level of your family.