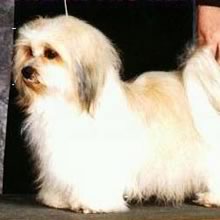 The Havanese, also known as the Havanese Cuban Bichon, Bichon Havanais, Bichon Havanes, Havaneser, Havanezer and Bichon Habanero, originated in Cuba. The Havanese originated by way of the Blanquito de la Habana or the Havanese Silk Dog, which is now an extinct breed. However, the Blanquito de la Habana could not have existed were it not for the Bichon Lapdogs that arrived in Cuba fro Europe in the 17th century. It was the acclimatization of the Bichon Lapdog that made way for the entirely white silky haired Blanquito de la Habana. The Cubans created today's Havanese by crossing the Blanquito de la Habana with both German and French Poodles, while keeping a higher content of the Blanquito apparent in the breed. The 19th century was the birth of the Havanese and by the 20th century, the Havanese was the preferred family pet in Cuba. Breeding of the Havanese in the United States did not begin until some time in the 1970's after many Cuban families migrated in the 1960's. Mrs. Goodale, a United States breeder sought to prevent the breed from extinction. Mrs. Goodale posted managed to collect 11 papered Havanese from various immigrant Cuban families to begin her breeding program. Mrs Goodale's Havanese lines first appeared in 1974 and the Havanese began receiving recognition with registries in 1991. In addition to the traditional Havanese, a short-haired verson began to appear in German litters in the 1980's. The short-haired Havanese, while not showable or breedable, is perfectly healthy.

The Havanese will typically reach heights of 8-11 inches, and an average weight of 7-13 pounds.

The coat of the Havanese has several varieties for choose from. In addition to the short-haired Havanese, there is also the possibility for wavy, curly or even corded hair. While not recognized by all registries, the corded coat is recognized by both the CKC (Canadian Kennel Club) and the AKC (American Kennel Club). The Havanese exhibits a soft double coat on both the outer and undercoat. The coat can grow to lengths of 6-8 inches and will feature a pearl hue. The short-haired or smooth coat Havanese occurs when two adults who carry the recessive gene are bred together. Typically, this will produce smooth coat puppies, however, not necessarily the entire litter. However, as stated above, the smooth coat is considered a serious fault in the show ring and is not able to be bred. The rim around the eye, nose and lips of the Havanese will be black, regardless of coat color, the only exception being the true chocolate coat. The coat of the Havanese can appear in virtually any color including parti, tricolors, silver, blue, black, cream, gold and white.

The Havanese is a very intelligent breed that will be quite easy to train. The Havanese responds very well to positive reinforcement and pleasant tones of voice. It is necessary to maintain a pack leader relationship with your Havanese to prevent Small Dog Syndrome. However, they will not respond well to unnecessary harshness.

The coat on the Havanese should be brushed/combed thoroughly at least twice a week. The Havanese is non-shedding and considered a good hypo allergenic dog. Excess hair around the pads of the feet should be clipped.

The Havanese is eager to please, but positive reinforcement works best. They are particularly sensitive to the tone of your voice. It was not uncommon for a time for Havanese dogs to appear in circus acts. This is attributed to their eagerness to please as well as their high level of intelligence.

The Havanese is good for apartment life. They are playful and are active indoors. The Havanese do not require a yard to play but do need to be taken on daily walks. They have an average demand for exercise.