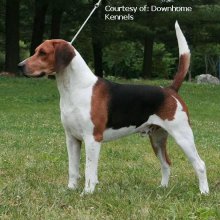 The Harrier breed originated in England, but exactly how is not entirely clear. There are several conflicting scenarios regarding the origin of the Harrier. The first scenario is that the Harrier resulted from a cross between the Bloodhound, Basset Hound and the Talbot Hound. Another belief is that the Harrier resulted from a cross between the English Foxhound, Fox Terrier and Greyhound. While the last belief is that the Harrier was simply bred down in size from the English Foxhound. The first Harriers were established by Sir Elias de Midhope in 1260 in England. After that, the breed began to branch out throughout England and Wales as a sought after hunting hound. The Harrier is an excellent hunting hound with a superb nose and is primarily utilized for hunting hare but also excels in fox hunting. Harriers in Ireland are primarily utilized for their fox hunting skills and can be found in packs working with mounted and foot hunters alike. Within the Harrier breed, there are two types, the field type and the show type. The field type is bred specifically for hunting work, while the show type is bred specifically for conformation.

The Harrier will reach heights of 19-21 inches tall and an average weight of 40-60 pounds. The Harrier will be smaller than an English Foxhound, but larger than the Beagle.

The Harrier's coat is very short and hard to the touch. The coat is also quite fine and should have a nice glossy look to it. The coat of the Harrier can come in any color. However, the most common varieties are tri-colored dogs with either lemon and white, red and white or white and tan markings.

The Harrier is energetic, outgoing and sweet-tempered. They make excellent family companions and are known to be extremely tolerant and loving with children. The Harrier is a pack breed, making them ideal for a home with other canine pets. However, as this breed is a hunter by nature, they are not recommended for homes with non-canine pets. They may do well with non-canine pets if raised with them from puppy-hood.

The Harrier is an average shedding dog and requires minimal grooming. The occasional brush and comb out of dead hair will be sufficient. Bathe your Harrier only when necessary.

The Harrier requires a firm and consistent pack leader when training. A more passive pack leader will result in a stubborn dog. It is necessary to require the dog to walk beside or behind you when on the leash. A dog allowed to lead the walk will believe he leads the pack.

Both the field and show type Harrier's require exercise in the form of a daily walk or jog. However, the field type, having been breed to work from working dogs, will exhibit higher energy levels and will require exercise above the norm. The Harrier can become high strung and even destructive if not provided with the necessary opportunity for exercise. The Harrier is not recommended for apartment living, as they are relatively inactive indoors and will require a great deal of activity outside the home.