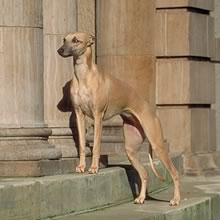 The Greyhound comes from England, but its roots can be traced all the way back to ancient Egypt, where carvings from 4000 BC are found depicting the dog. Greyhounds are one of the first dogs to be intentionally bred to a specific purpose outrunning and catching prey. The 'grey' in Greyhound may derive from the Latin word for 'high grade'; it is unrelated to the color (though there are grey Greyhounds). The modern day Greyhound became a very popular racing dog and was bred for short bursts of speed. Today, the breed is the fastest dog in the world and can run at speeds of up to 40 miles per hour, but Greyhounds have also become a popular pet. Hundreds of rescue adoption agencies have arisen to provide homes for ex-racers. Famous Greyhounds include Santa's Little Helper on The Simpsons, who is a rescued race dog. Popular for their athleticism, Greyhounds also serve as the mascot for many sports teams and the logo for Greyhound Bus Lines.

The Greyhound has a shoulder height of 68-76 cm (26.75-30 in) and weighs 27-34 kg (60-75 lbs). The Greyhound has a long, narrow head with small, folded ears, long hair, and a very deep chest. It has a highly flexible spine, dark eyes, and a long, graceful neck. Its speed comes from its large lungs and heart, powerful muscles, and a special gait in which all its feet leave the ground simultaneously twice per stride.

Greyhounds have a smooth, glossy, short-haired coat which requires infrequent grooming and bathing. Greyhounds can come in any color, particularly orange, black, white, fawn, or a roan of these colors with or without white markings.

The Greyhound has a high prey instinct and is inclined to chase anything that moves quickly, so it generally is not a good companion for cats unless raised alongside them. Although cautious around strangers, the Greyhound is normally very good with children and enjoys the company of other dogs. Ex-racers in particular are unlikely to get along with other pets. Greyhounds do not bark often.

Occasionally grooming the Greyhound with a soft brush is sufficient. Ears should be checked regularly for infection and the claws should be kept trimmed. Greyhounds tend to give chase to anything moving quickly when outside, so keep them on a leash or in an enclosed area. The Greyhound is sensitive to pesticides; flea collars and flea spray are discouraged. Provide soft bedding and a warm living space. Greyhounds have a lifespan of 10-12 years.

The Greyhound is fairly easy to train, and is usually obedient unless it has its eyes on potential prey. Greyhounds are sensitive, so an experienced trainer is recommended. They should be challenged by a variety of training exercises.

The Greyhound needs to run and walk great distances on a daily basis. A fenced yard of sufficient size is recommended.