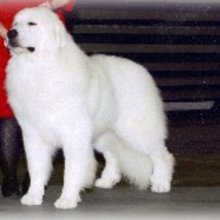 The Great Pyrenees (also known as the Pyrenean Mountain Dog or Pyr) descended directly from the earliest sheep guardians in Asia as long ago as 10,000 B.C. It was used for many years by Basque shepherds in the Pyrenees Mountains, which separate Southern France from Northern Spain, to protect their herds. The Great Pyrenees became popular with the royal class in France in the Middle Ages and was officially pronounced the Royal Dog of France by Louis XIV in 1675. It first came to America with General Lafayette in 1824. The Great Pyrenees gradually declined in popularity in France after the French Revolution, becoming very few in number and low in quality by the 1900s. Breeders made use of the Great Pyrenees still existing in their native mountain region to recreate the modern lines. Importation to America picked up again in the early 1930s, with American Kennel Club recognition following immediately thereafter. In World War II, the Great Pyrenees was used to haul artillery from Spain to France over the Pyrenees Mountains. Today, the Great Pyrenees is a moderately popular American pet and livestock guardian.

The height at the withers ranges from 27 inches to 32 inches for dogs and from 25 inches to 29 inches for bitches. A 27-inch dog weighs about 100 pounds and a 25-inch bitch weighs about 85 pounds. Weight is in proportion to the overall size and structure. They are a balanced dog, with the height measured at the withers being somewhat less than the length of the body measured from the point of the shoulder to the rearmost projection of the upper thigh (buttocks). These proportions create a somewhat rectangular dog, slightly longer than it is tall. Front and rear angulation are balanced.

The Great Pyrenees has a weather-resistant double coat. The outer coat is long, flat, and thick, consisting of coarse hairs which may be straight or slightly wavy. The undercoat is dense, fine, and woolly. The Great Pyrenees is white with possible tan, gray, or light yellow markings on the face or body. Colored Great Pyrenees (the plural noun is the same as the singular) are known as blaireau (with color) in France. Most Great Pyrenees coats grow thicker and lighten in color with age.

The Great Pyrenees is very sensitive to the tone of its trainers voice. Training must be calm, consistent, and patient, but Great Pyrenees will be obedient once trained. They may run away off the leash, so proper precautions should be taken.

The Great Pyrenees requires a moderate amount of daily exercise, including a leashed walk or playtime in a large yard. Many Great Pyrenees enjoy swimming. Another of their favorite activities is hiking, particularly in cold weather. The Great Pyrenees should not be over exercised when young as it needs all its energy to grow strong bones and put on weight.