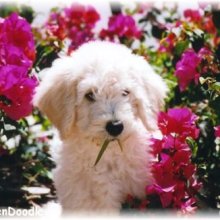 The Goldendoodle has an average shoulder height of 20-29 in (51-74 cm) and weighs 45-90 lbs (20-40 kg); mixes with Miniature Poodles or Toy Poodles tend to be smaller. As a crossbreed, the Goldendoodle has a wide variety of appearances. Those with more Poodle influence tend to have a thinner coat and shorter muzzle, whereas the Golden Retriever influence results in a wider neck, and longer muzzle. Goldendoodles can have short or long ears; most have a V-shaped ridge from the forehead to the nose.

The Goldendoodles coat is a cross between the Golden Retriever and Poodle coat. It has fine hairs which appear quite thick. It can be curly or straight, most fall somewhere in the middle. Unclipped, the hair will grow about 4-7 in in length. Unlike the Poodle, the Goldendoodle should not be clipped any shorter than 2 in, as the coat provides natural protection in heat and cold. Depending on the Poodle influence, the Goldendoodle can come in a wide variety of colors including white, tan, chocolate, black, red, silver, or a mix thereof. A variety of colors and coat textures can appear in the same litter. Depending on the source breeds, the Goldendoodle may shed little to none like the Poodle or shed moderately like the Golden Retriever. Generally, the lower generations are better for allergy sufferers. Most Poodle crosses will go through various coat phases in their first year of life.

Goldendoodles love to be with their family. They are eager to please and get along well with children, other animals, and strangers. They are social dogs and crave being around people.

The Goldendoodle requires regular brushing or combing every few weeks. Goldendoodles have a lifespan of 9-15 years. They are prone to most health issues affecting Golden Retrievers and Poodles, including hip dysplasia (malformed hip joint which can cause lameness or arthritis), ear infections (particularly for longer-eared dogs) and eye problems such as cataracts, but as a mixed breed they are somewhat less likely to suffer health problems than purebreds (known as hybrid vigor).

The Goldendoodle is intelligent and has a strong desire to please its master, making it highly trainable. Positive reinforcement is likely to be the most successful approach.

The Goldendoodle requires a moderate amount of exercise. Most enjoy swimming as both the Poodle and Golden Retriever are not averse to water. Goldendoodles can live happily on a farm or in a big city. They will thrive with daily walks or play time.