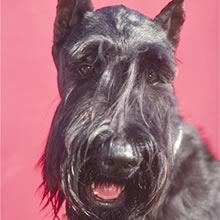 Schnauzers (meaning small beard in German) are named after an actual dog, Schnauzer who lived in Germany in the 1870s, but the breed itself existed as far back as the Middle Ages. This is evidenced by various sculptures and Rembrandt paintings. Early Schnauzers were likely derived by crossing gray spitzes with black poodles. This resulted in an adept rat hunter and guardian that became incredibly popular by the early 1900s, due in part to its distinct appearance. Standard Schnauzers (or Mittelschnauzers) became popular in World War I by serving as messengers and police dogs, and increased in popularity as a pet after World War II. The Giant Schnauzer (or Riesenschnauzer) was bred in Bavaria and Württemberg, Germany, in the late 1800s by cattlemen who sought to make a version suitable for cattle herding. They crossed the Schnauzer with the Great Dane and rough-haired Sheepdogs. Giant Schnauzers were great cattle herders and became popular guard dogs and police dogs in Germany.

The Giant Schnauzer has a soft, thick undercoat and a rugged, wiry outer coat which is solid black or salt-and-pepper colored. The coat is longer on the chin and face, forming eyebrows and a beard. The Giant Schnauzer sheds little.

The Giant Schnauzer gets along great with familiar children, dogs, and other pets, but it is wary and cautious with people and animals it does not know. Giant Schnauzers are best behaved when given sufficient exercise and human companionship. The Giant Schnauzer may be too energetic to play with young children unsupervised.

Though the Giant Schnauzer learns fast, it has a slight stubborn streak. Training must be fair and consistent and should not be overly repetitious. Giant Schnauzers are responsive to the sound of their handler's voice. They are versatile, and can learn a variety of activities such as hunting, retrieving, and herding.

Giant Schnauzers require a lot of exercise, including daily walks and vigorous playtime in the yard. They can live in an apartment provided they are exercised sufficiently.