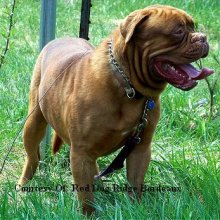 The early origins of the Dogue de Bordeaux (also known as the French Mastiff or Bordeaux Bulldog) are shrouded in mystery. Some say it descended from the Greek Molussus, others say it came from European mastiffs, perhaps the Neapolitan Mastiff. In any case, the source breed was adapted for violent dog fighting events such as bull baiting and bear baiting in fourteenth century France. The Dogue de Bordeaux was named for the French city of Bordeaux, where a Dogue was bred which took first place at a Parisian dog show in 1863. A firm standard for this breed, however, did not appear until the 1920s, when the Mastiff influence was determined to be unfavorable. Today, the breed is most popular in France, but is gaining increased attention in other countries. The Dogue de Bordeaux is still highly rare and at risk of being lost if strong lines are not developed. There are about 3,000 currently in the U.S. and foundation stock has been recognized by the American Kennel Club. A Dogue de Bordeaux named Beasley starred alongside Tom Hanks in Turner & Hooch.

The Dogue de Bordeaux has a shoulder height of 58-76 cm (23-30 in) and weighs 54-66 kg (120-145 lbs). It reaches its full height at one year old and its full weight at two years. Dogues de Bordeaux have short, muscular bodies with huge, wrinkly heads. They have a short muzzle, brown nose, and light eyes. Smaller Dogues de Bordeaux are sometimes referred to as Doguins.

The Dogue de Bordeaux is calm and patient. It should be well socialized with other animals from an early age. Dogues de Bordeaux have a patient, gentle temperament, however they are suspicious and confrontational with strangers and sometimes aggressive with other dogs, especially males.

The Dogue de Bordeaux is an average shedder which requires little grooming. It has a lifespan of 10-12 years and litters of only 2-3 puppies which often require delivery via Caesarean section. Accidental crushing of the pups by the mother is a potential risk for Dogues de Bordeaux.

The Dogue de Bordeaux requires a firm but gentle hand in training. This is a powerful animal and is not suitable for an inexperienced dog owner. Consistent training is required.

Bordeaux Bulldogs require a lot of exercise, but are very inactive indoors. They need either a yard to play in or a daily walk. Apartment life is suitable for the Dogue de Bordeaux.