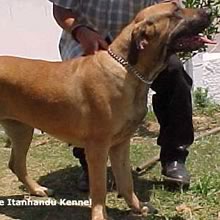 The Fila Brasileiro will typically reach heights of 25.5-29.5 inches and an average weight of 90-110 pounds.

The Fila Brasileiro's coat is a very distinct characteristic. The coat itself is short and smooth and sheds on an average basis, and the skin is very thick and loose. The loose skin is most pronounced at the neck and muzzle. The Fila Brasileiro can come in many color variations of nearly any color solid or brindle. The only color disqualifications are white, mouse gray, patched, dapple or black and tan. Varying levels of intensity in the brindle striping is acceptable. The most common coat colors are fawn, brindle and black with or without a black mask. It is permitted for a Fila Brasileiro to have white markings, however, they should be confined to the feet, chest and tip of the tail. Any white markings elsewhere on the body is undesirable.

The Fila Brasileiro is a very loving, affectionate and courageous breed. This breed will become very attached to his owner and will prefer to spend much of his time with them. However, though the Fila Brasileiro loves his owner, he loves the rest of the family just as much. This breed is well known for fiercely loving the children in their family and are happy to take all the abuse they can give. They are also known to love and protect other non-canine family pets as well. The Fila Brasileiro, however, does not do well with strangers and will almost always be distrustful of them regardless of the level of socialization. The Fila Brasileiro is not recommended for homes that enjoy a good deal of entertaining family and friends, as this breed does not enjoy strangers in his home. However, it is necessary to begin and continue socialization from a young age through adulthood in an effort to prevent extreme aggressive behavior.