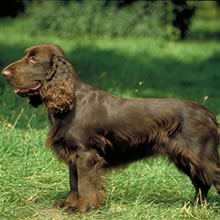 The Field Spaniel has a shoulder height of approximately 46 cm (18 in) and weighs 16-23 kg (35-50 lbs). It has a moderate stop (depression where the muzzle meets the forehead), almond-shaped eyes, and low set, wide ears. Field Spaniels have large webbed feet and a tail which slants downward and may be docked.

The Field Spaniel has a long, silky coat which is shiny, wavy and somewhat water-resistant. It may be solid colored, bicolor, or roan (close mix of dark and white hairs) in liver, golden liver, mahogany, or black, with possible tan or white markings.

The Field Spaniel is friendly to everyone, including children, dogs, and cats. It has a high prey instinct with rabbits, birds, and other small animals unless socialized when young. Field Spaniels are good with children, provided they do not play too roughly.

The Field Spaniel requires a weekly brushing. Show dogs require a clipping or professional grooming several times a year. Dead hair should be hand-plucked, particularly from the ears and footpads. The Field Spaniel has a lifespan of 12-14 years. It is generally healthy, but susceptible to hip dysplasia (malformed hip joint which can cause lameness or arthritis) and hypothyroidism.

The Field Spaniel requires daily exercise. It is primarily a field dog, so it is best suited to outdoor activities and exploration, but it will gladly adapt itself to the exercise habits of your family.