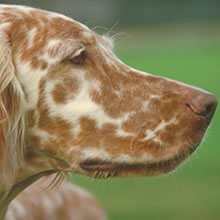 The English Setter, also known as the Laverack Setter, originated in England as early as the 1300s. Setting is the practice of freezing in a low crouch to point out game. The English Setter is the oldest of the Setter breeds, descending from the Water Spaniel, Spanish Pointer, and Springer Spaniel. The modern version of the breed was developed in the 1800s by Edward Laverack, who developed the initial stock, and R. Purcell Llewellin, who selected from this stock for field abilities, creating a distinct breed which is often associated with working English Setters. The English Setter soared in popularity in England in the 1860s, and became popular in America shortly thereafter, remaining highly popular today as a sporting breed. There are many unofficial localized strains of English setter, such as the Llewellin Setter and Newfoundland Setter.

The English Setter has a long, flat coat with light, silky feathering. The English Setters ticked flecks of coloring are referred to as belton, a term coined by breeder Edward Laverack after the town in which he hunted. Possible colors are white with black and tan (tricolor belton), orange (orange belton), or bluish-black (blue belton), and, more rarely, lemon (lemon belton) and liver (liver belton). Puppy English Setters are born white and slowly develop their natural color.

The English Setter gets along well with children, other dogs, and any household pets. It is very friendly with strangers, but will bark at intruders, making it a fairly good watchdog.

The English Setter requires a thorough brushing every 2 or 3 days. For the best appearance, it should have its old hair clipped or trimmed every few months. It is a relatively healthy breed with a few genetic disorders including hip and elbow dysplasia (malformed joint which can cause lameness or arthritis), deafness, hypothyroidism, cancer, and PRA, a retinal disorder. The English Setter has an average lifespan of 10-12 years.