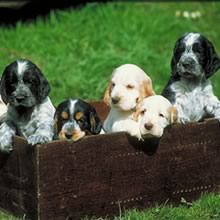 The coat of the English Cocker Spaniel exhibits medium-length fine hair on the body, and short hairs on the head. The hairs feather around the legs, chest, abdomen and ears, but the hair should not be curly. The coat of the English Cocker Spaniel can come in a wide variety of colors. These colors include solid black, liver, red or parti coloring of white with black, red or liver ticking. If the coat is solid, white markings are only permitted on the chest. It is not uncommon to find tan markings on parti, black or liver colored dogs.

The English Cocker Spaniel is naturally willing to learn and quickly understands what is expected of it. A great deal of understanding and consistency during training is necessary as it may try to take over your role.

Three walks a day are usually enough to keep the English Cocker Spaniel happy, but they also need to have regular opportunities to run freely in the countryside. Most really enjoy swimming.