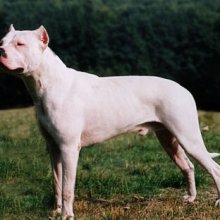 The Dogo Argentino breed was created by Dr. Antonio Nores Martinez in Argentina in 1928 and is also referred to as the Argentinian Mastiff and the Argentine Dogo. The Dr. created the Dogo Argentino with the intention of breeding a dog capable of hunting big game as well as being a dedicated protector of the dog's owner. The Dogo Argentino was used to hunt game such as wild boar and even puma. Dr. Martinez utilized the now extinct Cordoba Fighting Dog as the base for his breeding program. Several other breeds, such as the Great Dane, Boxer, Spanish Mastiff, Old English Bulldog, Bull Terrier, Great Pyrenees, Pointer, Irish Wolfhound and Dogue de Bordeaux are all believed to have contributed to the Dogo Argentino. The Dogo Argentino is not typically dog aggressive, however, this breed has been banned in several countries as a result of the breeds use in dog fighting. These countries include the United Kingdom, New Zealand, Norway, Denmark, Iceland, Portugal, Romania, Singapore and the Ukraine. PLEASE NOTE: This breed has been accepted for recording in the AKC Foundation Stock Service (FSS). This is simply an avenue to maintain reputable records regarding the breeds development. This breed is not eligible for AKC (American Kennel Club) registration.

The Dogo Argentino will typically reach heights of 24-27 inches and an average weight of 80-100 pounds.

The Dogo Argentino exhibits a thick and glossy white coat with no undercoat. The hairs are short and shed on an average basis. It is not uncommon to see a Dogo Argentino with a black marking on the head called a pirata. This feature is not accepted by all kennel clubs. However, the Dogo Argentino's home country club, the Federacion Cinologica Argentina recognizes this trait as acceptable.

The Dogo Argentino is an excellent guard dog that will protect it's family with fervor. This breed, while ferocious when called for, is known to be excellent with children and thoroughly enjoys cuddle time. However, this is a considerably large breed and care should be taken around small children to ensure accidents do not happen during play. The Dogo Argentino is known to get along well with non-canine pets, provided they are introduced form puppy-hood. It is not uncommon for the Dogo Argentino to display some aggression towards other dogs, however, they will rarely instigate a situation. It is necessary to begin socialization with this breed from a very young age as well as to make it clear to the dog that it is not his job to put another dog in his place.

The Dogo Argentino's coat is very low maintenance. It will require only the occasional brushing and baths only when necessary.

The Dogo Argentino is quite intelligent and is known to train easily. It is necessary for the owner to exert themselves consistently as the pack leader to ensure the dog does not develop stubborn tendencies.

The Dogo Argentino will require a fair amount of exercise, namely a daily jog or a long walk. This breed will do best with a yard to play in, but can live comfortably in an apartment setting.