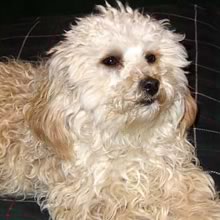 The Cockapoo (also known as a Spoodle or Cockerpoo, but unfortunately not Cockapoodledoodle) is a cross between the American Cocker Spaniel and the Poodle, a cross originating in the United States. Poodle crossbreeds are meant to produce a dog with mixed traits and the Poodles signature nonshedding coat. Unlike many other Poodle crossbreeds, which tend to be recent, the Cockapoo was first developed as far back as the 1940s. Like other crossbreeds, however, they have recently surged in popularity in America. The Cockapoo is also popular in Australia and Sweden, where it is known as the Spoodle. As a crossbreed, the Cockapoo is not eligible for registration with purebred registries such as the American Kennel Club, but it can be registered with the American Canine Hybrid Club, as Cock A Poo. The Cockapoo is not considered a purebred because it doesnt breed true, meaning that it doesnt display a consistent set of characteristics. Some breeders produce Cockapoos by crossing a purebred Poodle with a purebred Cocker Spaniel (called a first generation cross), but others allow crossing Cockapoos with other Poodles or Cocker Spaniels (called a backcross), or with other Cockapoos (called a multi-generation cross). Different crosses can result in different characteristics.

The Cockapoo has a coat which combines aspects of the Poodle and Cocker Spaniel coats. It may be very curly, flat, or anywhere in between. The Cockapoo can be a wide variety of colors such as white, cream, tan, or a mix thereof. A variety of coat colors and textures can appear in the same litter.

The Cockapoo's kind disposition makes it an ideal family pet. The Cockapoo is gentle and loving with children and enjoys the company of all living things, including other dogs and pets.

Cockapoos do not shed much, however the coat does require extensive grooming. Like other hybrids, Cockapoos tend to have fewer health problems than most purebreds (known as hybrid vigor). Potential health problems are hip dysplasia (malformed hip joint which can cause lameness or arthritis), luxating patella (dislocated knee), ear infections, and eye problems such as PRA and cataracts.

Cockapoos are intelligent and eager to please, which usually makes training a simple procedure. A consistent but not overly firm approach is required. House training the Cockapoo may be difficult.

The Cockapoo has low exercise demands. A small yard where it can run freely and an occasional walk, in addition to its indoor antics, will keep it happy. The Cockapoo is a good breed for an apartment or condominium.


Cock A Poo Puppies for Sale