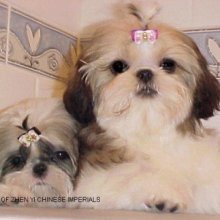 The Chinese Imperial has a shoulder height of up to 20 cm (8 in) and weighs up to 4 kg (9 lbs), but is preferred at 2-3 kg (4-7 lbs). It has a large, domed skull, pronounced stop (depression where the muzzle meets the forehead), undershot bite, and short muzzle. Chinese Imperials have a tail carried over the back and should have head and tail in correct proportion to the body. They are a compact and well-muscled breed.

The Chinese Imperial has a dense, straight double-coat which is usually groomed in a short puppy cut. It can be a variety of colors including black, copper, chocolate, and auburn. Its hair should be tied in a topknot above the head by a bow or ribbon.

The Chinese Imperial is intelligent and eager to please its master, making it highly trainable.

The Chinese Imperial can have most of its exercise needs met by indoor play, but it loves long walks and playtime in a fenced-in yard. Chinese Imperials cannot regulate their body temperature easily, which makes them highly prone to heat exposure; they should never be over exercised or left outside in hot weather. The Chinese Imperial is well-suited to apartment life.