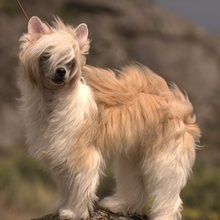 The Chinese Crested is a small breed known for its distinct appearance and personality. There are Hairless and PowderPuff varieties which are so different in appearance that they are sometimes mistaken for different breeds, but in fact hairlessness is a genetic trait; both types can be born in the same litter! There are many theories as to the Chinese Cresteds ancestry. Some say it a cross between Chinese breeds and an African breed which introduced the hairless gene and others say it is a cross between the Chihuahua and Mexican Hairless Dog. Some even think that Chinese Cresteds (along with the Rhodesian Ridgeback and a few other breeds) are a distinct species from all other dogs! In any case, the Chinese Crested was brought to China in the thirteenth century where it became a popular rat hunter and trading curiosity among sailors. It spread on sailing vessels throughout the mid-East, Africa, and South America. The Chinese Crested was not recognized by the American Kennel Club until 1991. Today, it is a popular show dog with a modest but devoted fan base among pet owners. Chinese Cresteds are sure to catch on in popularity in the coming years. A Chinese Crested named Sam was the three time winner of the Worlds Ugliest Dog competition, but dont let that spoil the whole breed for youSam just happened to be quite ugly!

The Chinese Crested has a shoulder height of 23-33 cm (9-13 in) and weighs up to 6 kg (13 lbs). It has a broad head, long muzzle, very large, upright ears, and almond shaped eyes. Chinese Cresteds have a flat back, merrily carried tail, and distinctive long, narrow hare feet.

The Chinese Crested gets along well with children (provided they respect its personal space), other dogs, and any household pets. Young children should be watched around the Hairless Chinese Crested as it does not have the coat most breeds have to protect it from rough play.