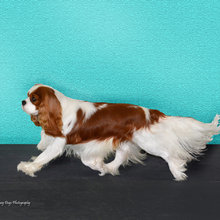 The Cavalier King Charles Spaniel (affectionately known as a Cav) is an offshoot of the King Charles Spaniel. The King Charles Spaniel was created by crossing small Spaniels with a short snouted breed such as the Pug or Japanese Chin. It was brought to Scotland from Continental Europe (possibly by Mary, Queen of Scots) in the 1500s or 1600s, where it became a fashionable lap dog and companion for the noble class. King Charles Spaniels were also popular lap warmers (and flea magnets) for the lower class. King Charles II, for whom the breed is named, grew up with a pet King Charles Spaniel (then known as the Toy Spaniel), and was such a big fan of the breed that he was accused of neglecting his official duties to spend time with his pet Spaniels. He once issued a decree that the breed could not be forbidden entry to any building, including Parliament! Some King Charles Spaniels, such as the red and white Blenheims, served as hunting dogs, but most strains were bred for appearance rather than work capacity. Over the years, the breed became smaller with a shorter nose. In the 1920s, a wealthy American man named Roswell Eldrige traveled to England and offered 25 pounds, a large sum at the time, for an old style or pointed nose version of the breed, similar to Charles IIs actual dog. The effort was successful, and the Cavalier King Charles Spaniel eventually surpassed its short nosed cousin in popularity, achieving American Kennel Club recognition in 1996.